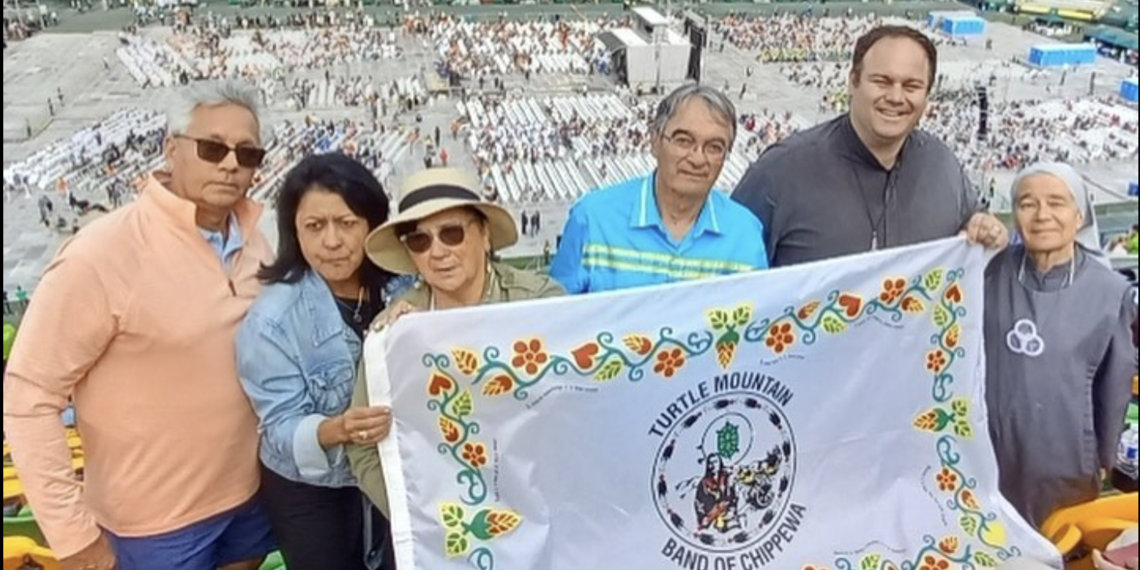 A group of 10 pilgrims set out to join thousands of others planning to attend the Papal mass at Commonwealth Stadium in Edmonton, Canada. The group, led by our pastor, Fr. Michael Slovak, SOLT, included parishioners, a couple originally from the area who joined us from Bismarck, and Sr. Mary Katherine Malmros, SOLT, who teaches at St. Ann's School.

Pope Francis addressed the First Nations, Inuit, and Metis in a meaningful and personal way as he visited with
survivors of residential schools in Canada and publicly apologized for the part which the Church and boarding schools staff, including priests and religious, played in their suffering.

The Papal mass took place on July 26th, the official feast of Sts. Joachim and Ann, which made it particularly special for our community. The Pope used the feast as an opportunity to highlight the beautiful Native American custom of deep reverence for elders. In his homily, Pope Francis highlighted the gift that grandparents are to families as they pass down traditions, share love, and fill in when parents are overwhelmed or otherwise unable to meet all of their children's needs. "Thanks to our grandparents, we received a caress from the history that preceded us: we learned that goodness, tender love and wisdom are the solid roots of humanity," Pope Francis said. "It was in our
grandparents' homes that many of us breathed in the fragrance of the Gospel, the strength of a faith
which makes us feel at home. He encouraged everyone to pass this "living faith" onto the next
generation.

Each member of the trip was impacted in a different way by the Pope's words in the Stadium and throughout the Pope's time in Canada. For Fr. Michael it was his time with elders of the community that stood out. "I got to be with members of the Tribe to listen and feel with them their reflection on the event and what it meant in their lives," he reflected. "That was wonderful."

Sr. Mary of the Redemption, SOLT, hails from Lowell, Massachusetts where she met Fr. James Flanagan, founder of the Society of Our Lady of... END_OF_DOCUMENT_TOKEN_TO_BE_REPLACED

Nestled at the base of the Pyrenees Mountains, right alongside a softly flowing river, and surrounded by the antiquity of a little French town,... END_OF_DOCUMENT_TOKEN_TO_BE_REPLACED

I set up the tripod and camera, focused the lens, and got everything in the shot. I walked across the room to double check... END_OF_DOCUMENT_TOKEN_TO_BE_REPLACED