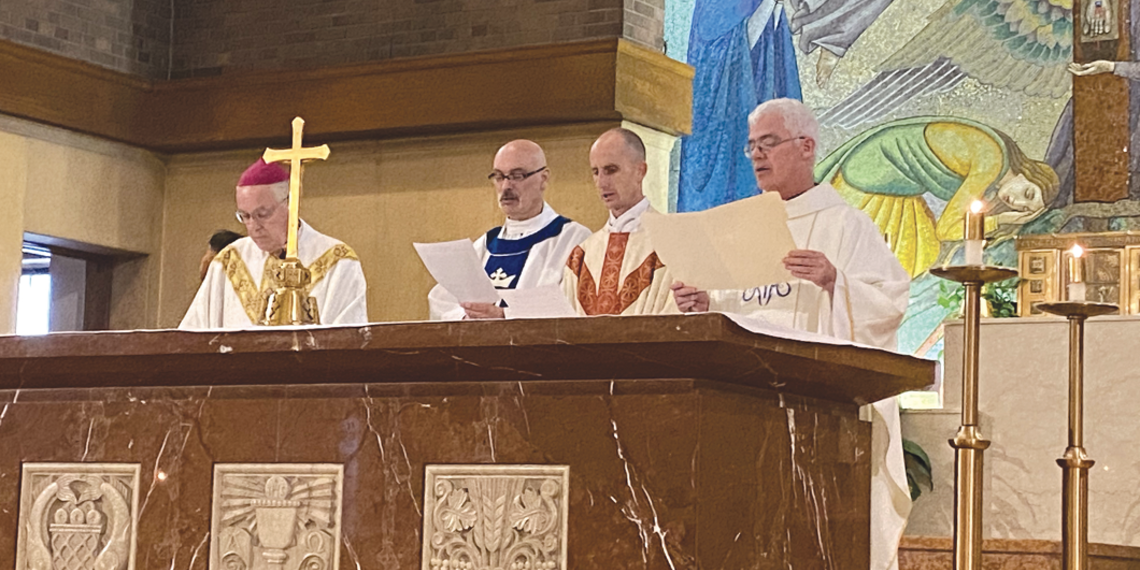 In 2010, the SOLT Clerical Society in the American Region decided to move the house of studies for our seminarians from Rome back to the United States. A discussion was held with Archbishop Vigneron of Detroit about housing opportunities for the SOLT House of Studies.  The Archbishop offered SOLT the care of the Parish of Most Holy Redeemer with a rectory large enough to house the seminarians. In August of 2011, the SOLT priests and brothers moved into the rectory and began ministering to the people of the parish.

From the start, it was easy for those of us serving in Detroit to see that this parish is a good fit for our community. Most Holy Redeemer is a bilingual parish with the majority of its parishioners being first generation immigrants from Mexico. They have a rich faith that has been handed down from previous generations and strengthened through the struggles and poverty they face due to being migrants and living in a city that is still striving to recover from the race riots of the 1960’s. The priests at Most Holy Redeemer enjoy ministering to the parish community and in turn the parish community has responded by sharing their gifts to help evangelize and facilitate spiritual and emotional healing through various ministries. We knew it would be a good fit for the sisters too.

After several conversations with Sr. Megan Mary, unsuccessful searches for a convent, and lots of prayer, an opportunity for a house directly across the street from Most Holy Redeemer Church arrived. In August of 2017, Sr. Kateri Burbee and Sr. Solanus Casey Danda were among the first SOLT Sisters to arrive in Detroit. The house needed quite a bit of work to transform it into a convent. Sr. Kateri accepted the challenge and the sisters began teaching at Holy Redeemer Grade School while construction was happening. The SOLT Sisters now own and occupy this beautiful convent.

Archbishop Vigneron held a Synod in 2016 and then issued a Pastoral Letter “Unleashing the Gospel.” His discernment of how best to implement the results of the Synod and his pastoral letter led him to the grouping of parishes called Families of Parishes. These “families” of three to seven parishes would help the local diocese move away from simply maintaining, and toward the mission of evangelizing, especially as the Church is facing a decline in priestly vocations. In the spring of 2022, it was announced that SOLT would have its own Family of Parishes consisting of Holy Redeemer, St. Gabriel, and St. Cunegunda.

The SOLT Sisters had been discerning where to move their house of formation since the closing of the Seattle Mission. The ten-bedroom house they were praying for was answered in was the vacated rectory at St. Cunegunda. The Sisters and aspirants have recently moved into St. Cunegunda nd the first group of SOLT Missionary Volunteers in Detroit are now residing at St. Gabriel’s vacated rectory.

This year the SOLT Mission in Detroit will be home to seven sisters, seven women in formation, six men in formation, two brothers and four priests. The expansion has been an unexpected blessing. It will be interesting to see how God’s blessings continue to unfold.

Fr. Dennis Walsh, SOLT is originally from North Haven, CT. He was ordained a priest in 2004 and has been serving as pastor at Holy Redeemer parish in Detroit, MI since 2011.

Sr. Mary of the Redemption, SOLT, hails from Lowell, Massachusetts where she met Fr. James Flanagan, founder of the Society of Our Lady of... END_OF_DOCUMENT_TOKEN_TO_BE_REPLACED

Nestled at the base of the Pyrenees Mountains, right alongside a softly flowing river, and surrounded by the antiquity of a little French town,... END_OF_DOCUMENT_TOKEN_TO_BE_REPLACED

I set up the tripod and camera, focused the lens, and got everything in the shot. I walked across the room to double check... END_OF_DOCUMENT_TOKEN_TO_BE_REPLACED